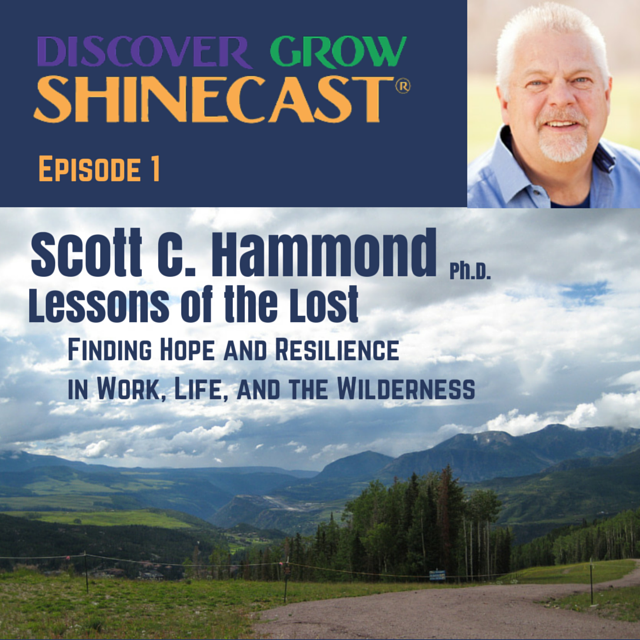 We begin our hero’s journey with a conversation about finding our way out of the wilderness of our lives.

In the first interview episode of the Discover Grow Shinecast I speak with Scott Hammond, Ph.D., author of Lessons of the Lost: Finding Hope and Resilience in Work, Life, and the Wilderness.

The idea for Lessons of the Lost came to Dr. Hammond as a result of his first rescue mission as a volunteer with the Rocky Mountain Rescue Dogs. The individual who was the subject of the search had been found, deceased, and Dr. Hammond went over to offer condolences to the wife of the victim.

“He was lost a long time before he went missing,” the wife said.

That observation led Dr. Hammond, a professor of Management at Utah State University, to begin to consider the parallels between being lost in the wilderness and being lost in life.

Karl Weick uses the metaphor of driving a car by looking through the rearview mirror to explain what it’s like to life our life looking back at our pasts. 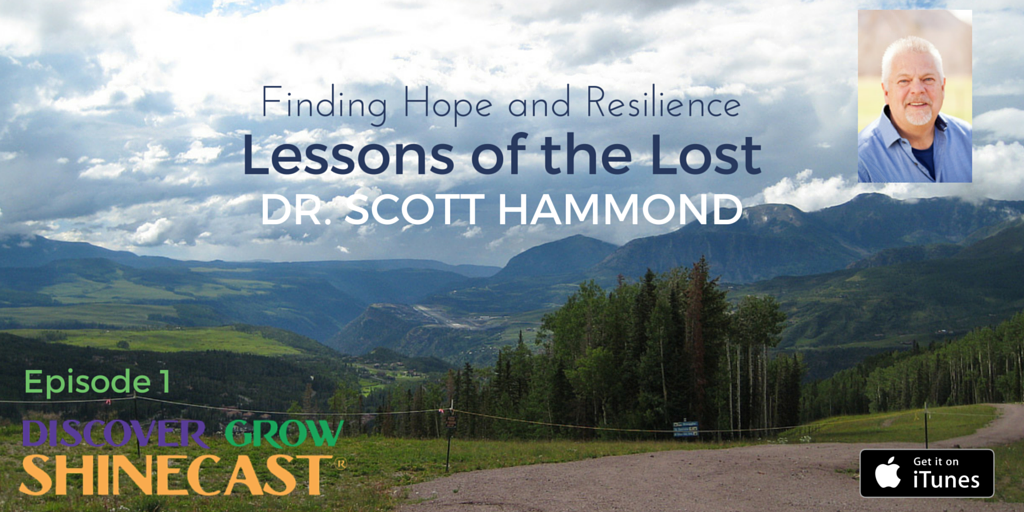 In the woods, a failure to look up and see new horizons can be fatal.

Dr. Hammond describes one rescue where the woman was so devastated by finding herself lost that she was unable to “see a new terrain” and a way out. She was rescued, but fortunate. Had she been willing to look forward she could have found her way out of her situation.

A focus on our hardships can be overwhelming and lead to a victim mindset, Dr. Hammond says. Similarly, the future can also look ominous if we focus only on the challenges that lie ahead.

The best approach is to stay in the present moment, but have a vision of our ideal future.

After interviewing more than 100 survivors who were literally lost in the woods, Dr. Hammond found a common theme among those who went on to thrive after the experience:

They always kept in mind a vision of their ideal future.

The belief that there was an ideal future and that it might be attainable in some way kept them going, Dr. Hammond found.

The vision of an ideal future fueled their hope.

The victim in the first story went into the desert, literally, and never came out when his vehicle was stuck in the sand. He was a long-time alcoholic who’d slowly withdrawn from family and friends, then from society, then into psychological isolation.

Dr. Hammond uses this example to illustrate the early stages of lostness:

First there was a physical separation from his family and social connections.

The same situation occurs when we’re lost in the literal woods. The simplest example is the lost Boy Scout who gets separated from the rest of his troop on a hiking outing.

As the alcoholic man physically removed himself from social encounters with others, he experienced a psychological isolation, which contributed to further withdrawal.

In the woods, the Boy Scout realizes he’s lost. At that point, he can panic or attempt to reorient.

Deviation from Your Core Values

The third stage of lostness in Dr. Hammond’s analysis is the deviation from core values.

Deviation from core values can lead to selfish behavior and choices that the lost person would not engage in under their normal values system.

In the literal woods, the lost Boy Scout stops following the best practice strategies that he’s learned for survival. Perhaps he drops his coat in the heat of the midday sun without remembering he’ll need it when the cold arrives with darkness.

The alcoholic victim began to make poor decisions that led to further isolation and withdrawal.

The fourth stage of lostness is a sense of deprivation.

In life, this is where we begin to focus on what we don’t have that others have. It may be material wealth, professional success, “the perfect family” life. The victim believes that others have something the victim doesn’t have.

At this point in our conversation, I asked Scott to put this into the context of the hero’s journey, where the hero meets the obstacle and has to either overcome and be transformed or succumb and perish.

The lost survivors that Dr. Hammond interviewed were ordinary people.

“The outcome was only their survival,” Hammond says. They didn’t save a nation, a ship or a team from perishing but they saved themselves and that act of saving yourself is so heroic.”

Dr. Hammond shares the story of one victim, Victoria, a physician’s assistant from Maine who set out on a solo day hike in a remote area of southern Utah. The woman was experienced in wilderness survival, but she still ended up in a life-threatening situation. This story is in the book and begins around the 16-17 minute point in the show.

Victoria finds herself trapped in a pit with a severely broken leg, no water, and no way for any rescuer to see her.

Hours go by and she can’t figure out how to get out. She can’t climb out or pull herself out. Too much movement is too risky because the broken bone is almost protruding through the skin. If the fracture breaks the skin, she would likely bleed to death before she might ever be found. 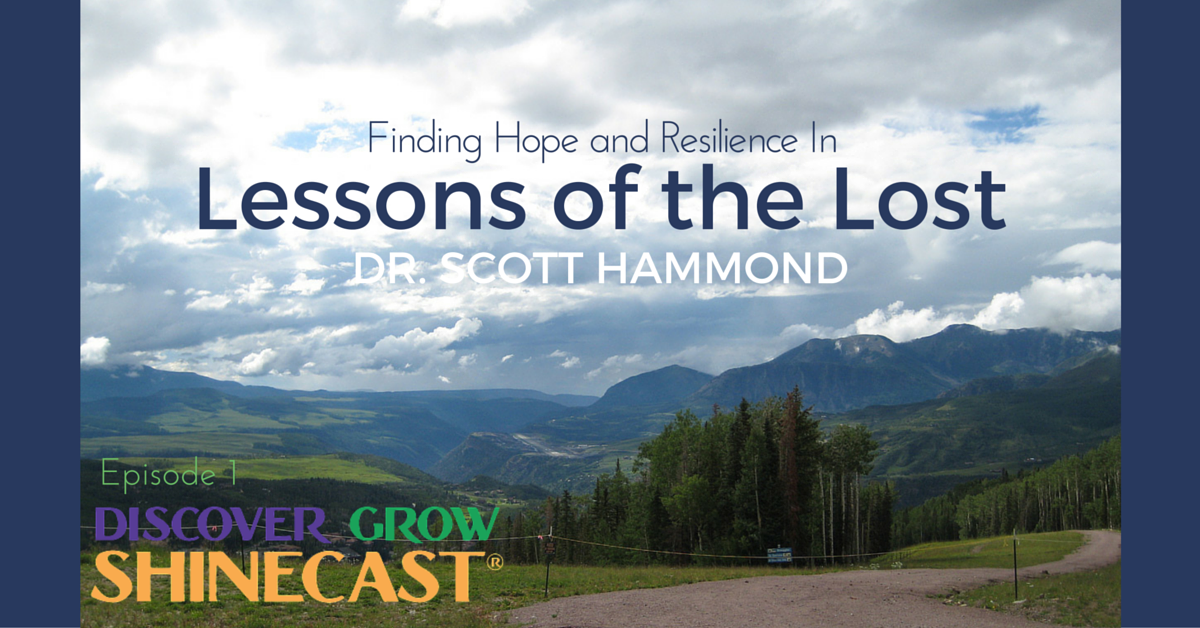 As her mind works, she begins to visualize herself backwards and that visualization leads to an epiphany and the prospects for a way to get out of the pit.

“Small things can really make a big difference when you’re lost,” Dr. Hammond points out, using the example of how she used a $2 poncho to collect twigs for the fire as she dragged her way down to the stream for water. That $2 poncho also kept the rain off her one night and helped to shield her from the wind.

The second lesson is that “small things can make a really, really big difference.”

The third lesson is that “she always kept a vision of the ideal future.”

“Hope is the notion of the ideal future, that you can, in fact, realize an ideal future. And that’s what Victoria always kept in her mind.”

Another revelation is that when Victoria got about two-thirds of the way to the top of pit she slipped and her last memory of that moment was that she was at the end, it was over. And then she woke up and she was at the top of the wall, outside the pit.

We have to believe and know that there’s something more than our own strength and capabilities at work in this universe.

“Once we’ve done everything we can, the people around us and the higher power that we believe in can help, too,” Hammond says.

At this point in the podcast conversation, I reference another lesson from the book: Movement creates an opportunity.

Staying where you are and “hugging a tree” can be a great strategy for someone who’s lost—provided people know you are lost and know where to look for you, Hammond says.

“Sometimes you have to do that one thing that makes the huge difference,” Hammond says.

Scott also describes an example from the end of the movie, All Is Lost, starring Robert Redford, without giving away the ending. The only way to be saved is to destroy everything he has left.

“One thing that happens when we are lost is that we experience a lot of shame,” Hammond says.

It’s not uncommon for people who are lost in the woods to hide because they feel shame about being lost and it’s also true in life when someone is lost because of addiction, financial issues, unemployment, Hammond says.

“We don’t want other people to see that we are that kind of vulnerable.”

The willingness to go public about being lost is an important first step, Hammond says.

Another lesson from the lost is that when lost, we often have too much data, yet not enough information.

I posed the question about how fear of change and fear of uncertain outcomes that lead to immobilization.

Simply “surviving is the most expensive place you can be.”

“Thriving is the most efficient place you can be,” Hammond says. “It’s where you are happiest.”

“So many of us get stuck in survival mode because it is the devil we know and we’re not willing to take the risk to move up into that higher plane.”

Scott gives an example of a physician he met recently who had set out to be a surgeon and just at the final stages of his long years of training to get to the highest level of surgical medicine he made a mistake that essentially cost him his career as a specialty surgeon at a top hospital and he ended up as a general surgeon at small rural hospital. He’s now been there 4 or 5 years and is so happy. He loves everything about how his life has turned out and the small town environment has been wonderful for his family. He says that tragedy in his life was exactly what he needed.

You can learn from what doesn’t work, as well as what does work (me)

“Learning is the key. When you are lost, it’s a high learning time. You’re usually facing situations you’ve never face before and you don’t have a way of reorienting.”

“You can learn your way out of those situations or you can choose to survive and wallow and let circumstances control you.”

Helping Those Who Are Lost

“One thing that’s stunning is how many people are willing to help you through your difficult situations.”

“There are so many people in America who volunteer to help others….they do volunteer firefighting, volunteer search and rescue, volunteer EMT, they volunteer at a hospital, or they work at a job as a teacher, as a health care provider, doing those things that help people who are lost.”

I read/paraphrased a segment from the book:

Fear leads to self-doubt and shame and tells you that you’re not worth saving, it drives your creativity underground.

“Fear is so toxic,” Hammond says.

My question: What do we do individually and as a culture to help mitigate this fear?

Scott’s reply: “I posed that to an emergency room doctor recently and she said the thing that reduces fear the most is the power of human touch. She said I abundantly give hugs.”

“When people know that you care it does so much to relieve fear.”

“Dogs sense the darkness and they also sense the light.”

Quotes are those of Scott Hammond, if I failed to identify the speaker. 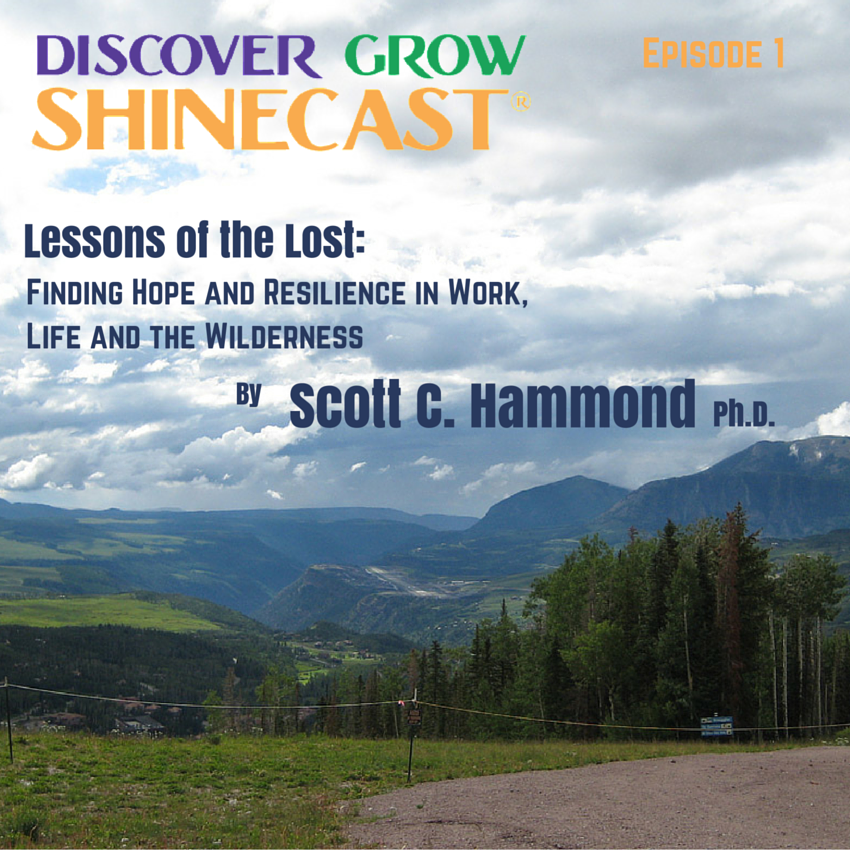