Sometimes we can make choices that take us off course, even when we think we’re headed in the direction of True North.

I think perhaps some of my choices over the past 15 months probably led me down some side paths that while more northwest or northeast, rather than True North.

I’m not second-guessing my efforts, because I don’t really know. My faith is such that I believe the detours are sometimes part of a bigger plan that we don’t see until it’s fully revealed. [I have an article on the wall in my home office reminding me that detours are probably ahead and that detours often are  get us closer to the destination than we realize.]

In January 2015 I wrote a post for the See Jane Write blog, titled “Find Your True North to Find Your Life Path.”

The post was intended to help launch this Shinecast website by describing a little bit about my own life path and how I came to the Shinecast® vision and mission. I’d been dabbling in the Shinecast media project for several years, but hadn’t given it the focus it needed.

The timing of my See Jane Write message coincided with the start of my last semester as an assistant professor at Samford (I’d given my resignation notice the previous August). Even though I was leaving the job, my goal was to make it the best (or at least one of the best) experiences for students in my classes. So I put everything I had into that last semester of teaching. In spite of my monetary and time investment to talk about the Shinecast with the See Jane Write community, I basically ignored this Shinecast website and the Shinecast® mission.

To the extent I had any time left after teaching, I used it to develop the Birmingham Shines podcast and website, which I launched May 1, 2015.

As it happens, Birmingham Shines podcast was a side venture that I’d conceived of as a portfolio and business networking project to help me move into some type of media related work to generate income, while I continued to develop the Shinecast website and media content.

I also thought Birmingham Shines would help me to promote the Shinecast website and spread the Shinecast message about choosing to pursue your purpose, rather than waiting to be picked, and doing the thing that makes you shine.

Each Birmingham Shines episode began with a Birmingham-specific focus, and then evolved into a bigger picture conversation about with the interview guest related to purpose, calling, “choosing yourself,” doing something to SHINE.

By September 2015, I was beginning to realize that Birmingham Shines and a separate-but-similar concept, the Ignite Alabama podcast, weren’t producing the fruits that I’d envisioned.

At first, it seemed that Ignite Alabama was going to be a big success, but I found it very difficult to line up the guests I needed for the show to serve its purpose–sparking entrepreneurship and innovation in Alabama. I’ll skip the analysis on that, for now.

I also began to consider the idea that perhaps I might have deviated from my own true north as I focused on Birmingham Shines, Ignite Alabama and related income-producing ventures at the expense of the larger Shinecast, which is my passion and what I feel is my true north calling.

By the end of October, I’d stopped working on Ignite Alabama and did very little with Birmingham Shines, other than to finish out interviews I’d already scheduled.

I took November and December off. Well, I didn’t sit on my hands during those months: I applied for numerous jobs that seemed like good fits for my purpose, passion and skills). I also went into intensive reflection-and-spiritual awareness mode.

Some of the blog posts I wrote during the last few months of 2015 reveal some of my soul-searching.

Leaping into the Void, Part 1

Get Lost Before You Leap

Light Through the Cracks

Birmingham Shines, Ignite Alabama: Are They Core to the Mission?

I suspect that at some point in 2015 I step off the main path and meandered off into directions that I never really considered as part of my mission, vision, purpose when I decided to leave Samford in August 2015 to develop the Shinecast body of work.

On the one hand, the meandering might have been a necessary part of my journey, because some very positive things seem to be coming out of it now–as the darkness gives way to light and the prism turns to reveal some new truths in my life.

On the other hand, it’s also possible that if I hadn’t deviated from my original vision (and hadn’t dawdled between 2013-2015) that I might be much farther along in my journey.

In the same way that we don’t see the work that goes into making a flower while the bulbs are buried in the winter soil, I can’t know in March 2016 whether the work I was doing last year was preparing me to flower now or whether it was a distraction. 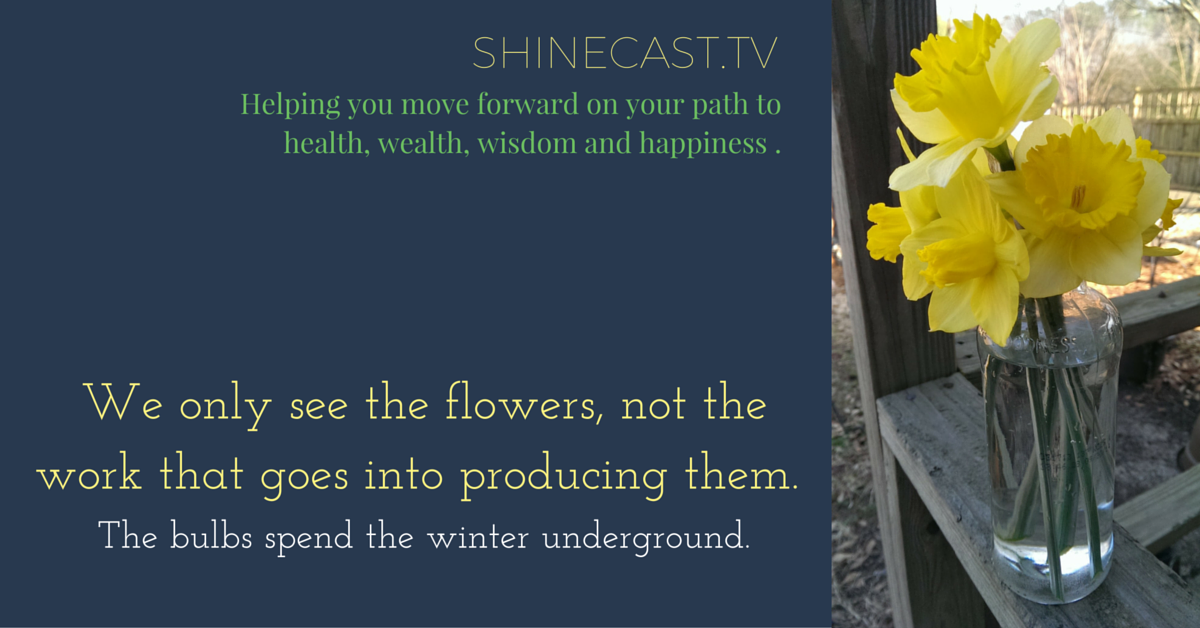 I know that, at times, especially in 2015 I felt a sense of angst because I didn’t feel like the work I was doing was leading closer to my ultimate purpose, even though I truly did enjoy that work.

I love interviewing people, creating podcasts, sharing positive messages, whether about entrepreneurship, Birmingham, or something else.

The reality is that much of what I was doing to create and share Birmingham Shines and Ignite Alabama came to feel more in the nature of busy-ness than forward progress in the direction of my TRUE NORTH.

The topics and messages of Birmingham Shines and Ignite Alabama are authentic and consistent, but the audience I was reaching and building probably isn’t the audience I feel called to connect with. And the time I spend on those is time that I can’t use to do the most important work I feel led to do.

That said, the new interviews I’ve done so far in 2016 (as a result of referrals from a few interviews from 2015) are opening doors that I could not forsee at the time.

We Never Know For Certain

I can’t know the answer to whether I stepped off the true north path for a while.

I only know that I am where I am right now, on this hero’s journey that is my life. I call it the happy life path, regardless of detours that sometimes seem like they lead only to dead ends.

Have you ever been in similar situations?

To make sure that I’m moving forward toward TRUE NORTH, I’m making some changes in how I spend my time and energy.

As I approach the 1-year anniversary of Birmingham Shines, I’m also considering whether I want to continue that podcast or let episode 40 mark the end of that side journey.

I’m considering what to prune so I can focus my attention on the bigger Shinecast vision, which is my true north.